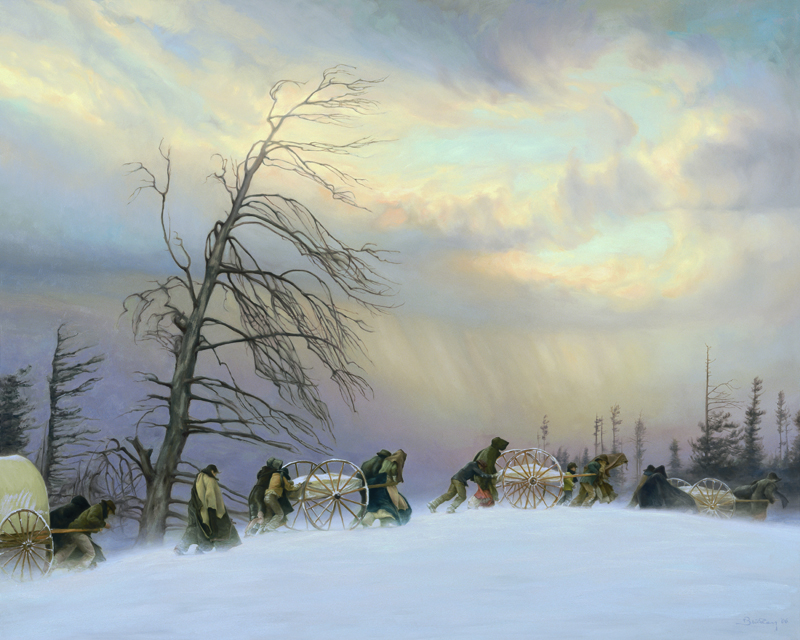 And it came to pass that the wind did never cease to blow towards the promised land while they were upon the waters; and thus they were driven forth before the wind. - Ether 6:8

The tragic yet inspiring struggle of the Martin and Willie handcart companies can serve as a parable of our own mortal journey.  This scene depicts a moment when the clouds break, offering a glimpse of Heaven’s warmth while they yet continue to toil in bitter conditions.  The large tree, leaning like the pioneers toward the promised land, is meant as a symbol of fortitude and perseverance.  Bent and broken by the harsh world, it’s upper branches yet reach high like hands lifted to heaven.  The direction of the fierce Wyoming wind was inspired by the Book of Mormon account of the Jaredites, who suffered a “Furious wind” that tossed them upon the waves of the sea, but that same wind “never did cease to blow towards the promised land” (Ether 6:8)

Thus, in the painting the windswept pines seem to point the way and beckon them onward, suggesting that the same forces that cause our extremity are often those that bring us closer to God.  John Jaques, who lost his own child on the trek, later said, “When the Lord calls His Saints to do anything, if they will rely upon Him and do the best they can, He will fit the back to the burden and make everything bend to accomplish His purposes.” - Joseph Brickey